SAY it quietly now, the Ugg boot is back, and leading the cushioned charge are Rihanna and Sienna Miller.

Of course, Miller has always been partial to the marmite style of the shoe world. In her boho heyday at Glastonbury in 2004 (below), she topped off that studded, belted minidress and those rave shades with a pair of Ugg’s classic cuff booties. Others basked in the Somerset fields in Birkenstocks during the particularly balmy year, however Miller committed to the fugly footwear, and probably returned from the festival sans blisters. Several years and several boots – sand, black and more chestnut pairs included – and the actress stepped out in a shaggy pair in New York. You can take a girl out of Glasto, but the Uggs are non-negotiable during NYC’s cold winters. 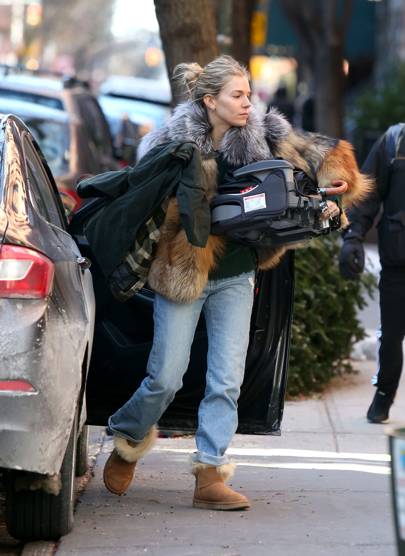 Next up, Rihanna. Fresh of the back of Y/Project’s thigh-high collaboration with Ugg, the Barbadian popstar dug out her sheepskin slip-ons for a flight into JFK. Styled with a Gucci parka, Palace tracksuit bottoms, Dior logo bag, Fenty x Puma furry tote and Off-White x Warby Parker sunglasses, the Uggs were anything but a cosy after-thought for her plane-to-arrival gate photocall. It’s only a matter of time before she’s spotted in Glenn Martens’s iteration of the surfer boots. 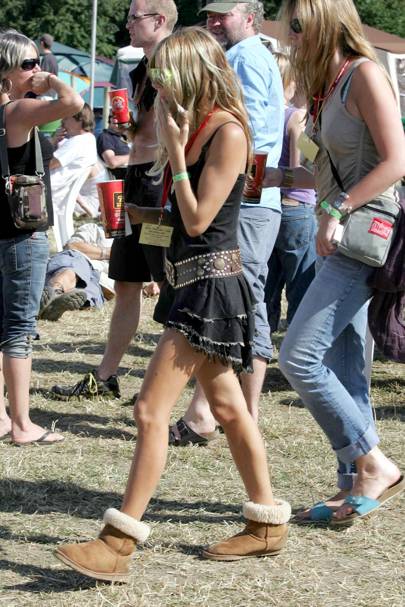 Whether you go thigh-high like Y/Project’s loyal fans, or mini à la Miller, the question is not which, but when. There’s a finite amount of dark mornings left, so use your Uggs to your advantage.